You might be forgiven for thinking that the chicken Caesar salad recipe was invented by the Romans, I mean come on, that’s the only Caesar I know, and I’m sure you’re probably the same. But no, sorry to dash any illusions you had of Roman emperors being fed mayo soaked lettuce leaves, because this creamy salad actually originated in Mexico of all places, in a restaurant of the same name, Caesar’s. I guess it makes sense really, nowhere near as exciting as my Roman rendition, but hey ho.

The salad was a lot simpler in those days – no bacon, no chicken, no croutons – the ingredients spoke for themselves and that was all that was needed. These days however the humble Caesar salad has had many a makeover and I’m going to share with you my own version of a Chicken Caesar Salad recipe that I think you’re going to love.

Mine uses homemade croutons (great for using up any leftover stale bread you’ve got knocking about) and a scattering of sun blessed tomatoes, which are a new discovery of mine and hence I am putting with everything at the moment. What I love about this Chicken Caesar Salad recipe is that it’s so quick to make, so if you want something that doesn’t require much effort but you’re bored to the back teeth of having sandwiches again, then this is the one. 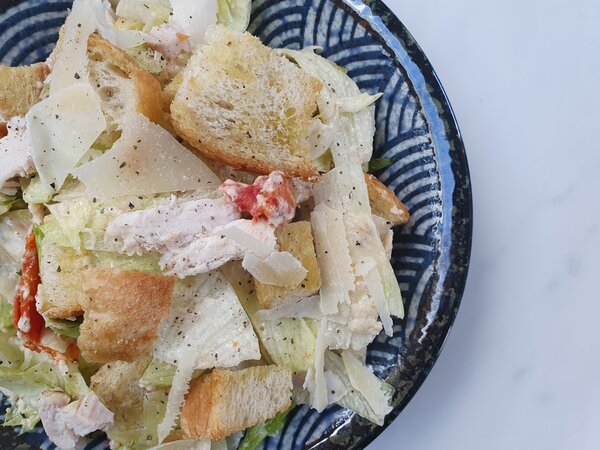 How Do I Make It?

Let’s start by making the croutons, as you can then get the rest of the salad ready while they’re in the oven. Tear the bread into bite sized pieces and lay out on a baking sheet. Drizzle with the olive oil and then shake the tray to make sure they’re coated well. Cook in a hot oven for about 10-15 minutes or until crispy and golden brown. I like mine to still have a bit of sponginess to them, because they can then absorb the salad dressing a bit more, but it’s entirely up to you how much you crisp them up.

While the croutons are in the oven, cut the lettuce into strips and put in a medium sized bowl. In a separate bowl mix the mayonnaise with the chopped up anchovy fillets, chopped tomatoes, grated Parmesan, and some salt and pepper – you won’t need too much salt as the anchovies are already very salty. I specifically haven’t added a measurement for the amount of Parmesan to use as again it is a personal choice and with things like this Chicken Caesar Salad recipe I tend not to measure things, but rather wing it and go with what looks right. For arguments sake it was about a couple of tablespoons worth.

Spoon 3/4 of the dressing over the lettuce and mix until it is well distributed. Add the chicken, keeping back a couple of pieces, and mix again.

Remove the croutons from the oven and add most of them to the salad, before adding the remaining dressing and giving it another good mix.

Spoon onto serving plates and top with the rest of the chicken, croutons, some Parmesan shavings and a good grinding of black pepper.

So that’s lunch sorted in 15 minutes tops, and if you’ve been mega prepared and have the croutons already made, then you’re looking at not even 5 minutes. Result!

Let me know if you give it a try and also what you would add to your own version of a Chicken Caesar Salad recipe. To maintain your health and reduce the risk of health issues and problems, you need to start working out today. The e...
Read More Yoga is an ancient practice that has been around for hundreds of years. It is practiced worldwide in different ways a...
Read More Have you ever felt disoriented and wondered if you’re going blind? If this is a recurring problem, you might want to ...
Read More