How To Stop A Panic Attack – 9 Simple Ways

You were enjoying a great movie with your friends when you suddenly felt a sense of darkness engulf you. You were asked multiple times what caused the panic attack, but you couldn’t explain it. That feeling of deep fear emerged out of the blue, wreaked havoc in every inch of your being, and just when you thought you could take no more, it started calming down.

Panic attacks can occur to any of us, at any point in time, and anywhere! Want to know a little more about this condition and how it can be managed? Read on.

What Is A Panic Attack And How Does It Feel Like? 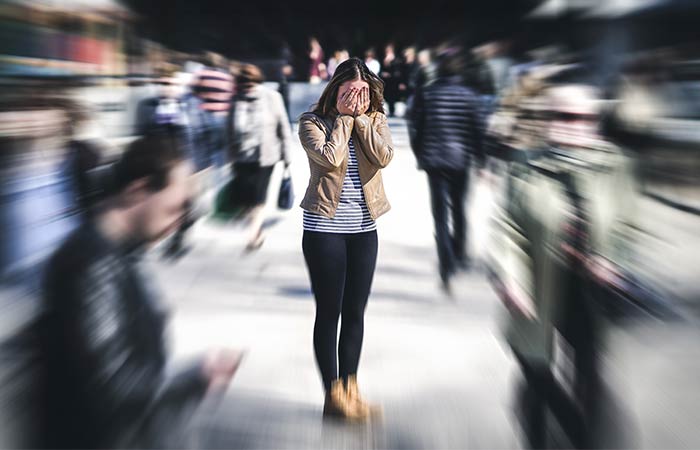 A panic attack can be defined as a sudden feeling of intense fear that strikes without prior warning. Such attacks can trigger severe reactions that are usually physical and occur even when there is no apparent danger.

A panic attack is usually very frightening, and the affected person may feel like they are almost dying. It can occur anywhere and at any time. It is usually a result of heightened anxiety and is more common in those with a panic disorder, although it can also occur in individuals without the disorder.

Let us now understand who is at risk of such attacks.

Who Gets Panic Attacks?

Factors that increase one’s risk of developing panic attacks include:

• A family history of panic attacks
• Gender – Women are at a higher risk than men.
• Increased stress due to death or a serious health condition of a dear one
• Emotional trauma due to a serious accident or sexual assault in the past
• Major life changes from instances such as a bitter divorce or addition of a baby
• Excessive caffeine consumption
• Smoking
• Substance or alcohol abuse
• A history of cardiac symptoms

The exact cause of panic attacks is yet to be identified. However, the following factors are believed to play a major role in the onset of the condition.

What Are The Causes Of A Panic Attack?

Panic attacks can be caused due to:

The changes in the functioning of your brain are usually brought about by the reception of a surge of signals that are designed to warn you of impending danger. This activates a part of the brain called the amygdala, which is responsible for controlling an individual’s anxious response.

The amygdala of some people tends to react even though there is no evident danger, making them more prone to high anxiety and panic attacks.

When a person receives a signal to react to anxiety, the adrenal glands secrete adrenaline. This hormone is popularly referred to as the “fight or flight” hormone, and its release is associated with symptoms like sweating, increased heartbeat, churning in the stomach, and irregular breathing. All these are signs of a panic attack.

If adrenaline is secreted without any imminent danger, the system will be overloaded with the hormone, and this build-up can also result in a panic attack.

The onset of a panic attack is characterized by the following symptoms.

What Are The Symptoms Of A Panic Attack?

Panic attacks can be occasional or may occur frequently. One attack may vary from the other in many ways, but the symptoms usually reach their peak within minutes of the onset of a panic attack.

The signs and symptoms associated with a panic attack include:

Most individuals diagnosed with a panic attack tend to be battling an underlying panic disorder. Treatment for panic disorder is usually aimed at reducing the intensity of the attacks and helping improve your quality of life. 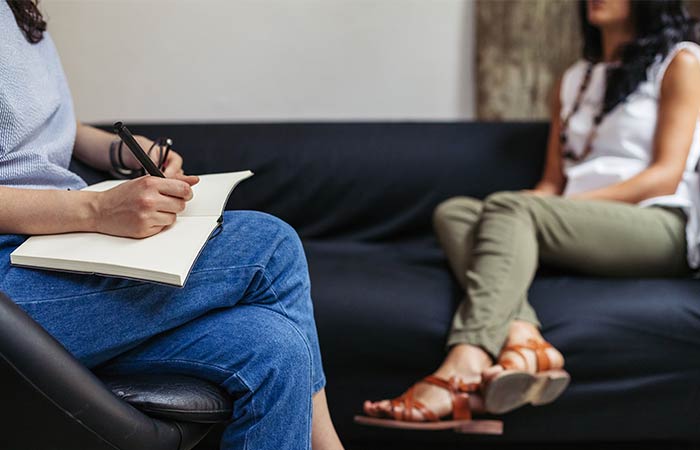 Psychotherapy, also referred to as talk therapy, is usually the first choice of treatment for panic attacks. It helps the patient learn through their experience to cope with the attacks.

Certain medications can help reduce symptoms of a panic attack. They are:

In addition to these treatments, there are also a few other strategies that can help in preventing a panic attack from reaching its peak when you know that one is around the corner. They are as follows.

If you are able to recognize an impending panic attack and tell yourself that the attack is just temporary, you’ve already won half the battle. It helps you deal with other fears that may cloud your thoughts. It also helps you pay more attention to what can be done next to prevent a full-blown attack.

2. Find An Object To Focus On

Look around you and find any object that catches your attention. Focus all your energies to make a mental note of the color, shape, pattern, and size of the object. This may help in managing a panic attack and alleviating its symptoms.

Make a conscious effort to relax every muscle of your body, one at a time. Start with your fingers and slowly move up your hands and then through the rest of your body. Muscle relaxation is effective in treating generalized anxiety disorder. It may, thus, also help control your body’s response to a panic attack.

Doing some light exercises can pump up the endorphin levels, enhancing your circulation and improving your mood right away. However, as you are stressed, avoid vigorous exercises and practice mild to moderate ones, like walking or swimming. Do not engage in any form of exercise if you are hyperventilating or facing difficulties in breathing.

Lavender essential oil can also act as a quick fix for an impending panic attack. Lavender oil is effective in relieving symptoms of anxiety and stress almost immediately.

Deep breathing is a sought-after technique to reduce the symptoms of a panic attack. All you have to do is breathe in and focus on the air filling your lungs. Then, hold the air in for a second and breathe out slowly. Controlled deep breathing can help with stress and anxiety. This, in turn, can also help in reducing the other symptoms associated with a panic attack.

7. Keep Calm And Close Your Eyes

Most panic attacks can be quite overwhelming, and a fast-paced environment just adds to it, making the symptoms worse. So, the moment you feel a panic attack surfacing, close your eyes and block any extra stimuli bothering you. This can help you feel calm almost immediately and also make it easy for you to concentrate better on your breathing.

8. Reach Out For Your Happy Place

Another great way to battle a panic attack is to escape the situation that has been causing it. While you may not be able to escape the scenario physically, right away, you can do so mentally. Start by imagining yourself in your happiest place. The place could either be your home with all your loved ones around you or simply your favorite beach. Now, focus on the minutest of details of the place that makes you happy. This will make you feel calm and relaxed.

Practicing mindfulness will give you a reality check of your surroundings. Panic attacks are often associated with detachment and may take you away from reality. Focusing on practicing mindfulness, be it feeling your dress’s texture or running your hands through your hair, can help ground you to reality.

These tips can help you overcome a panic attack most of the times. However, remember, not every technique will work for everyone. Find the technique that works best for you and use it whenever you experience an attack. If nothing helps, stick to the medications prescribed by your doctor for immediate relief.

If you have any more helpful tips and tricks to deal with panic attacks, share them in the comments section below.

How to help someone through a panic attack?

If you come across someone having a panic attack, do the following:
• Stay calm and do not allow the situation to get out of hand.
• Help the person stay calm by offering support and ask them to take deep breaths.
• Stick around.
• Be understanding, encouraging, and positive. Help the person find the cause of the attack and support them to be able to think rationally.

What is the difference between a panic attack and an anxiety attack?

Anxiety Attack Vs. Panic Attack
Anxiety Attack
• It occurs when something is perceived as either threatening or stressful.
• It can be mild, moderate, or severe.
• It builds gradually.
Panic Attack
• It can occur out of the blue, even when there is no apparent danger.
• Its symptoms are usually severe and disruptive.
• It may occur abruptly and go on to trigger worry about another possible attack.

Can a panic attack kill you?

Panic attacks can leave you feeling as if you are about to die with sudden chest pain, racing heart, difficulty in breathing, and so on. However, you cannot die from a panic attack. Nonetheless, you need to consult a doctor to prevent further complications.